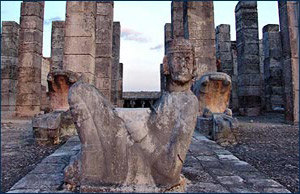 Twice a year, on March 21st and September 22nd respectively, on the spring and fall equinoxes, when the day and night last exactly 12 hours each, you can witness a spectacular shadow effect that resembles a serpent slithering down to the bottom of the staircase.

This pyramid was built for astronomical purposes and during the vernal equinox and the autumnal equinox; at about 3 P.M. sunlight bathes the western balustrade of the pyramidÂ´s main stairway. This causes seven isosceles triangles to form, which imitate the body of a serpent 37 yards long creeping downwards until it joins the huge serpentÂ´s head carved in stone at the bottom of the stairway.