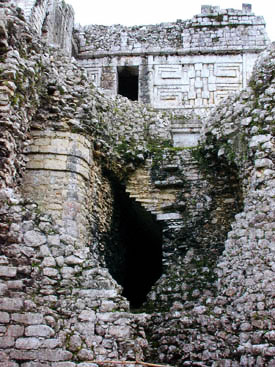 Located to the east of the Caracol, Akab Dzib means, in Maya, “The House of Mysterious Writing.” An earlier name of the building, according to a translation of glyphs in the Casa Colorada, “the flat house with the excessive number of chambers,” and it was the home of the administrator of Chichén Itzá. INAH completed a restoration of the building in 2007. It is relatively short, only 6 meters high, and is 50 meters in length and 15 meters wide. The long, western-facing facade has seven doorways. The eastern facade has only four doorways, broken by a large staircase that leads to the roof. This apparently was the front of the structure, and looks out over what is today a steep, but dry, cenote. The southern end of the building has one entrance. The door opens into a small chamber and on the opposite wall is another doorway, above which on the lintel are intricately carved glyphs, the “mysterious” or “obscure” writing that gives the building its name today. Under the lintel in the door jamb is another carved panel of a seated figure surrounded by more glyphs. Inside one of the chambers, near the ceiling, is a painted hand print.