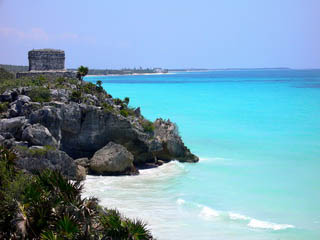 Tulum beaches are considered one of the best beaches in the Riviera Maya, some of them almost virgin, an invaluable nature reserve.

The white sands, their turquoise waters, the beautiful landscapes with unforgettable views, and the tranquillity are the flavors so that you live unique vacations.

It offers the pleasure of a virgin beach, separated from concurred places.

It is located south of Tulum, within the Reserve of the Biosphere of Sian KaÂ´an, and it is possible to arrive through a narrow coastal highway.

It is located in a land strip, between the Caribbean Sea and theMuyil Lagoon, the campings of fishermen provide the basic services to you: a comfortable bed, food, and transportation by boat.

Lovers of nature will enjoy the tropical vegetation, and the observers of birds can rejoice themselves with little common units.

Those that prefer to encamp will have to bring their own provisions, including food and water.

Punta Allen is located in a small peninsula within the Reserve of the Biosphere Sian Ka´an, an extensive protected area of 528.147 hectares in the center of the state of Quintana Roo, throughout its coast run more than 100 kilometers of the Great Mayan Reef.

The access is by way of terrecería, the energy obtains by means of generators and solar paddles and the potable water is extracted from wells.

The east coast of the peninsula watches towards the Caribbean while the West offers manglares and Mayan channels.

Another vehicle to arrive at Punta Allen is by highway 307 or Chetumal-Tulum highway, arriving at “the Hope”, taking the way from terrecería, until arriving at the Playón, a place where you can leave your vehicle in charge of a watchman, and later be able to cross in the boat, until Punta Allen.

Where are the ruins of Tulum?

The magical ruins of Tulum are walled to the east and face the Caribbean Sea to the west.

Thanks to its strategic location, Tulum proved to be one of the most powerful city-states during the 13th and 14th centuries, particularly after the fall of a rival city, Mayapán.

In their day, the Mayan ruins surely presented an imposing figure to seafaring visitors to the walled city.

In fact, when the Spanish first arrived there in 1518, they considered Tulum to be as big as Seville.

However, shortly after the Spanish began their occupation of Mexico, the ancient Mayans who once called this majestic site home abandoned it.

Who built the ruins of Tulum?

You are probably thinking of the Mayans, right?

That would be the easy answer.

Of course, that’s like saying the French built the Statue of Liberty.

According to the archaeological finds in the Ruins of Tulum, the site began to be inhabited as early as 564 AD.

Although it never exceeded approximately 1,600 inhabitants, the place remained occupied until shortly before the end of the 16th century.

It was then that the disease brought by the Spanish wiped out most of the population.

Over a period of 7 centuries, rulers came and went. The city we know as Tulum was transformed by each new generation of inhabitants and their respective styles and influences.

As a result, as in other Mayan ruins in the Yucatan Peninsula, many of the buildings fuse different architectural styles depending on the time they were built or expanded.

Both for its ruins and for its natural wealth, where its beautiful beaches bathed by crystal clear turquoise waters stand out, offering a beautiful spectacle for any visitor, and where couples fall in love with this magical place away from the noise and bustle of the cities.

Without a doubt, a paradise that you cannot miss at least once in your life.