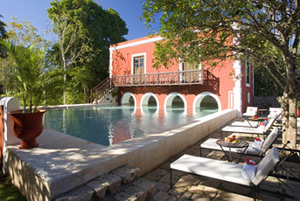 The ruins of the pre-Hispanic city of Mayapan are only 40 kilometers away from Merida. The site was created based on Chichen ItzaÂ´s design, and located 100 kilometers away from it. In its architectural design, the builders incorporated elements of other cultures from central Mexico, skillfully combining them with the traditional Mayan architecture. The experts point out that Mayapan was the headquarters of the Liga de Mayapan (Mayapan League), which eventually was dissolved in violence and concluded with the fall of Chichen Itza.