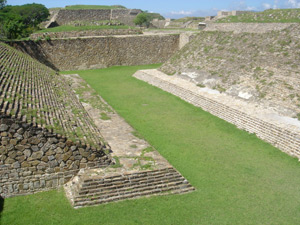 The length of the playing field of the Chichen Itza Ball Court is 545 ft with two 26-foot high walls running alongside which were probably used as the bleachers for spectators. The eastern side supports the Temple of the Jaguars and the opposite side supports the Temple of the Tigers, which defines the limits of the court and probably served as a box for the lord and high-ranking officials and priests to watch the game.